What Is The Difference Between FMEA & RCFA?

Failure Mode and Effects Analysis (FMEA) is a methodology aimed at anticipating equipment failure by proactively identifying all potential failure modes of the various parts of a system. It identifies the effects the failures can have on the system and provides a maintenance strategy to avoid the failure and/or mitigate the effects of the failure on the system. Conversely, Root Cause Failure Analysis (RCFA) is the process for pinpointing the root cause(s) of a specific failure to determine what corrective action(s) must be implemented to alleviate or reduce the probability that the problem will recur due to the same root cause(s).

FMEA focuses on identifying failure modes existing within the structural design of an asset or system and how those failure modes effect operations. A failure mode is the way a system, process, or piece of equipment can fail. The more complex the asset, the larger the number of failure modes.

Often, this analysis will also assess the criticality of the risk associated with the failure modes through the use of Failure Mode Effects and Criticality Analysis (FMECA). The difference between FMECA vs FMEA is that the latter incorporates criticality analysis with a more quantitative risk determination.

Asset failure is expensive, and the sooner a potential failure is uncovered, the less it will cost to remedy. The benefit of FMEA is it strives to identify all likely failure modes. By proactively discovering failures during development, FMEA offers lower costs solutions and more options for mitigating risk.

SAE J1739 provides a standard for FMEA and gives general guidance in the application of the methodology.

The Two Categories of FMEA

While similar in execution, PFMEA and DFMEA differ in their focus. While PFMEA focuses on process failures, DFMEA focuses on design failures. Below is a quick comparison between the two methodologies.

Design FMEA (DFMEA) is the systematic approach used in product development to improve quality and reduce potential risks of failure. As new products are designed, or existing designs are modified, design failures can be unintentionally introduced. Using DFMEA, potential failures are identified early in the process. Detecting failures before production leads to significant cost savings compared to countermeasures in later design phases.

Process FMEA (PFMEA) is the structured methodology used to discover potential failures within processes. Similar to DFMEA, PFMEA focuses instead on detecting failures caused by changes in a process as compared to a new or updated product design. A Process FMEA should be applied when:

Subscribe to our newsletter for industry best practices, resources, and insights into asset performance management.

How To Perform FMEA

The FMEA process is performed step-by-step, with each consecutive step building on the previous. Below are the nine steps involved in FMEA.

Step 1: Define the process or function

The first stage identifies each process, part, or system to establish the intended function and the interrelationship between different subsystems or components.

The information gathered in step one is used to determine how the system or design could potentially fail. While failure modes can be part-specific, failures in one subsystem or component can affect and cause additional effects in other interconnected systems. That is why it is critical to create the asset hierarchy in step one and uncover all failure modes in step two.

Next, failures are ranked based on the severity of the consequences. Failure impacts are ranked on a one through ten scale, with one being little to no effect and ten representing severe risk. 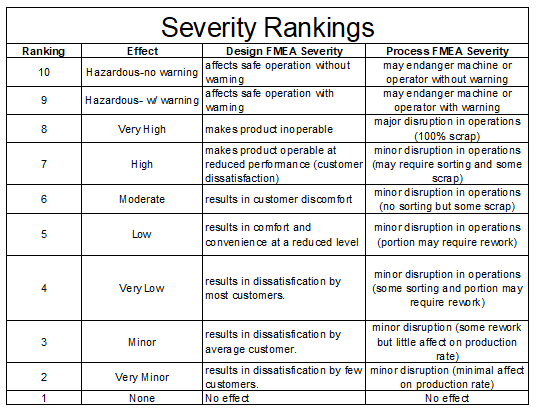 Similar to the severity ranking, the occurrence ranking also classifies failures on a one through ten scale. However, it rates the likelihood of failure rather than the severity of a failure’s effect.

A ranking of one represents a near-impossible likelihood while a ranking of ten signifies an extremely high probability.

The detection ranking represents the chances a failure is discovered before occurring. Ratings of one rating mean an almost certainty that a failure is detected while a ten means the failure cannot be detected.

The Risk Priority Number (RPN) ranks risks from highest to lowest by combining the rankings for severity, occurrence, and detection. RPNs in FMEA help teams prioritize risks from most critical to least critical.

Create an action plan for specific failures based on the highest calculated RPNs. Lower RPNs by targeting one or all the contributing factors: severity, occurrence, or detection. For example, implementing condition-based monitoring can improve failure detection, thus lowering the RPN.

Following corrective action, recalculate the RPNs and re-evaluate which failures to target.

Failure is inevitable, and when failure does occur, RCFA is the process for discovering the root cause(s) for said failure and using that information to create a corrective action plan. While there are many methods to assist with RCFA – Fishbone Diagram (Ishikawa Diagram), 5 Whys, Cause Map – the process is generally the same.

The purpose of the collection phase is to form a team to investigate the failure, define the problem, and finally collect data from the incident. When defining the problem, it is important to keep it short and simple to understand. Overly complex or problem statements biased towards particular solutions can lead to insufficient resolutions. Finally, it is time for the actual data collection. Normally, data can come in the form of failed components, pictures and reports, or staff testimony.

The analysis phase is focused exclusively on uncovering the failure cause and effect chain that ultimately leads to the root cause of failure. For more complex systems, use of the cause and effect methodology and a “fishbone” diagram are useful structures to integrate cross-functional impacts and see the overall picture of the failure. To avoid bias assumptions, an important guideline is to always follow the data.

You can download a fishbone diagram excel template here.

Finally, it is time to formulate a solution. The solution phase attempts to break the cause and effect  chain as determined in the analysis phase. Subsequently, the more developed the cause chain, the greater the capability to break the chain. Generally, solutions are corrective and/or preventive actions and are associated with the identified failure action and/or condition causes with corresponding effectiveness evaluations.

When to Utilize RCFA

The most common time a failure analysis is employed is following a critical failure, which is why RCFA is often described as reactive. However, when used effectively, RCFA can be a proactive methodology to prevent future failures.

During equipment rebuild or disassembly following a malfunction, an initial RCFA cause map can provide useful data that would otherwise be missed. This data can be critical during the collection phase of a full RCFA. Additionally, it leads to insight on what caused the initial failure, possibly leading to corrective action before rebuild that will avoid future unplanned failures.

FMEA and RCFA on RCM

FMEA is an integral part of the Reliability Centered Maintenance (RCM) process because it helps classify failure modes and their effects, as described in SAE JA1011. After establishing failure modes, FMEA helps determine what maintenance strategies should be developed for its corresponding assets. Conversely, the RCFA process provides the opportunity to eliminate recurrent asset failures based on actual asset history analysis.

FMEA and RCFA assist a RCM methodology with both a proactive and reactive approach. While FMEA offers the benefit of reducing costs by discovering potential failure modes earlier in the process, RCFA provides increasingly accurate solutions with the use of historical failure data.